These cookies and cream cupcakes are Oreo overload. They have Oreos in the cake and the frosting - and I am completely obsessed.

When I was younger, I had even more of a sweet tooth than I do now (crazy, I know). Or maybe I just ate more snack foods. Regardless, I would eat pop tarts for breakfast, ice cream for an after dinner treat, and I would come home from school and literally eat an ENTIRE sleeve of Oreos. They were my kryptonite. Especially the double stuffed. Who's with me?!

Lately, I have been craving Oreos. So instead of Oreos in their beautiful natural state, I thought, why not stuff a bunch of them into this chocolate cupcake and buttercream icing?! Genius, I know. Sometimes I really amaze myself hehe. ANYWAY, my point is, these cookies and cream cupcakes are soooooooo good! They have crushed Oreos in the cake and Oreo crumbs in the buttercream frosting, so these are an Oreo lovers DREAM. Plus, they are super easy to make and can be ready in under a half hour!! And as an even bigger plus, you can snack on some Oreos while you are making them! That's a win win in my book!! Enjoy 🙂 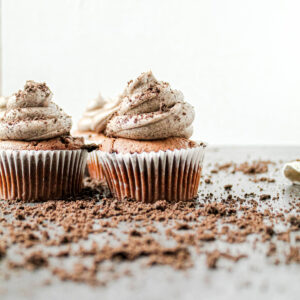 Tried this recipe?Let us know how it was!
« Mini Cheesecakes
Chocolate Cookies with Dark Chocolate Frosting »