I am completely obsessed with these Nutella donuts. They are made from a yeast dough, coated in sugar and filled with a delicious chocolate hazelnut cream filling. Yes, yeast doughs are more work than a baked donut, but they are also 100% worth the extra effort because they yield unbelievable results.

What are Nutella donuts?

When I first bit into one of these warm donuts, I had to sit down. They were that good. They are lightly crisp on the outside from frying and warm and fluffy on the inside. There are three main components of these Nutella donuts.

Can donuts be baked?

This is a common question, but unfortunately these yeast doughs cannot be baked because you will basically end up with bread rolls. Baked donuts are different as they are cake based, and are baked in a pan with donut cavities. If you want a baked donut, I suggest checking out my Chocolate and Candy Cane Donuts, Powdered Donuts or Apple Cider Donuts.

Can donuts be air fried?

Similar to the above, if you attempt to air fry these donuts they will resemble bread rolls. An air fryer is just a mini convection oven, and while I wish it yielded the same results as frying the dough in oil, it does not even come close.

The best way to fry donuts

Ideally, we use a deep fryer. But not all people have a deep fryer lying around in their household (me included) so I just fry them in a few inches of oil over the stovetop. This requires a thermometer - you want the oil temperature to be hanging out around 365 degrees Fahrenheit. This temperature is exactly what you need in order to achieve that lightly golden color on the outside, but fully baked on the inside.

If you are finding that your donut is too brown on the outside and underbaked on the inside, it is likely your oil is too hot. It is causing the outside to get too dark too quickly and is not giving the donut enough time to cook all the way through.

If you are finding that your donut is taking forever to cook and is super oily, it is likely you have the opposite problem of the above. Your oil is too cold. Remember to use a thermometer and keep monitoring the temperature throughout the frying process.

While I love Nutella, I recognize that it is not everyones cup of tea. Other filling ideas include lemon curd, jam, chocolate ganache, or even a custard. The options are truly endless, so do what you love here!

How to properly fill a donut

While this recipe can be made using cups, I highly, highly suggest using the measurements by weight. It is not only easier in terms of process, clean up, etc., but it also is more accurate. Scales are super inexpensive and you can get one from Amazon! As much as I would love to only post my recipes using weight, unfortunately using cups is way too common in the US (where I am based), so I do both. 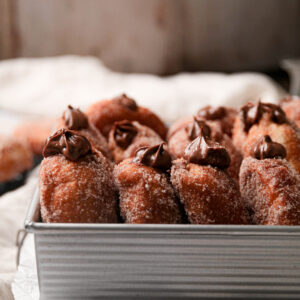 These nutella filled donuts are SO good. They are lightly crisp on the outside, fluffy on the inside, and the nutella whipped cream filling make them to die for.
Print Recipe Pin Recipe
Prep Time 30 mins
Cook Time 20 mins
Proving time 1 hr 30 mins
Total Time 2 hrs 20 mins
Course Breakfast
Servings 16 donuts

Keyword Donuts
Tried this recipe?Let us know how it was!

Tried this recipe? Make sure to rate and review and tag @sturbridgebakery on Instagram!