Okay okay okay. I know I say this a lot. But this pull apart cinnamon roll bread is what gets me up in the morning. It is SO soft and fluffy, the outside gets a little crisp while the bottom is OOEY and GOOEY and smothered in a buttery cinnamon sugar mixture. And I get it - yeast is scary. But it should not be. Yeast is honestly so magical and if you have flour and a counter where you can knead your dough, you can make yeast breads your b*tch.

This recipe reminds me so much of monkey bread, which I used to eat a lot as a kid (like borderline too much but we're not going to harp on that). Now, why is it even called monkey bread? My wikipedia knowledge tells me that it is because it is a finger food - we pick apart the bread as a monkey would. Traditionally, monkey bread is in a bundt pan and rolled in a cinnamon sugar mixture. But I have a few tricks up my sleeve that makes it EVEN better which is why I call it EXPLODING pull apart cinnamon roll bread. Like, literally it will explode in your oven. You will need to put a roasting pan underneath your loaf pan because odds are some of the rolls will fall out and the buttery cinnamon sugar GOODNESS will spill out of the pan.

What ingredients do I need for this cinnamon roll bread?

For the dough you will need:

For the coating you will need:

Why do I need bread flour?

So, I used bread flour when developing this recipe because of its protein content. To get all science-y for a second (I hated science in school so who thought it would excite me now?), the main difference between bread flour and all purpose flour is the protein content. Bread flour has a high protein content and therefore can produce lots and lots of gluten. This gives the bread its classic elasticity and stretch. HOWEVER we do not want to use ALL bread flour because then it will be too chewy. Compare it to a pizza, which typically uses bread flour. Pizza is very chewy - which we don't want - we want the bread to be light and fluffy and tender. My mouth is watering just thinking about it.

To be completely transparent, I used bread flour when I was testing this recipe for the first time because I ran out of all purpose flour (LOL) but I loved it so much I decided not to change it. I think it is the key to a soft, light, fluffy, and tender cinnamon roll bread.

How long does the cinnamon roll bread dough need to rise?

To make a long story short, yeast is truly amazing. If I put back on my science hat for a second, the scientific name for yeast is Saccharomyces Cerevisiae, which literally means "sugar eating fungus." Yeast feeds on the sugars in flour and produces carbon dioxide in the process, which gives bread that beautiful rise.

This bread requires two rises. The first is for two hours. I know it's annoying, but worth it. It always gives me so much satisfaction to start off with a small dough ball and then it grows into a massive monster that's going to eat my children. Just kidding, I don't have any children. And then it is even MORE satisfying to punch it down when it's ready to get all the air out of it.

Yeast thrives in a warm, draft-free environment, so definitely put a towel over your bowl. I also like to put my bowl in the oven (while it's OFF) with the door cracked open. That will give it the perfect place to be happy and grow. Once the first rise is done, we will roll it in the coating mixture, place the dough in the loaf pan, cover it and let rise again for another 20 minutes. You will see in this quick 20 minutes HOW much this dough can rise. Which again, is why you need a pan underneath your loaf pan in the oven because it will, indeed, explode.

Why does this recipe also include measurements in grams/milliliters?

I hope you love love love this pull apart cinnamon roll recipe as much as me! Drop a comment if you give it a try! 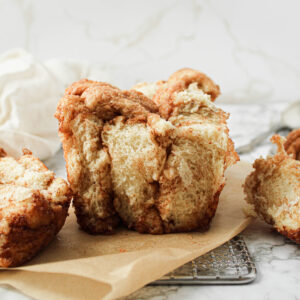 Tried this recipe?Let us know how it was!
« Peanut Butter Mousse Tart
Espresso Almond Butter Cookies »